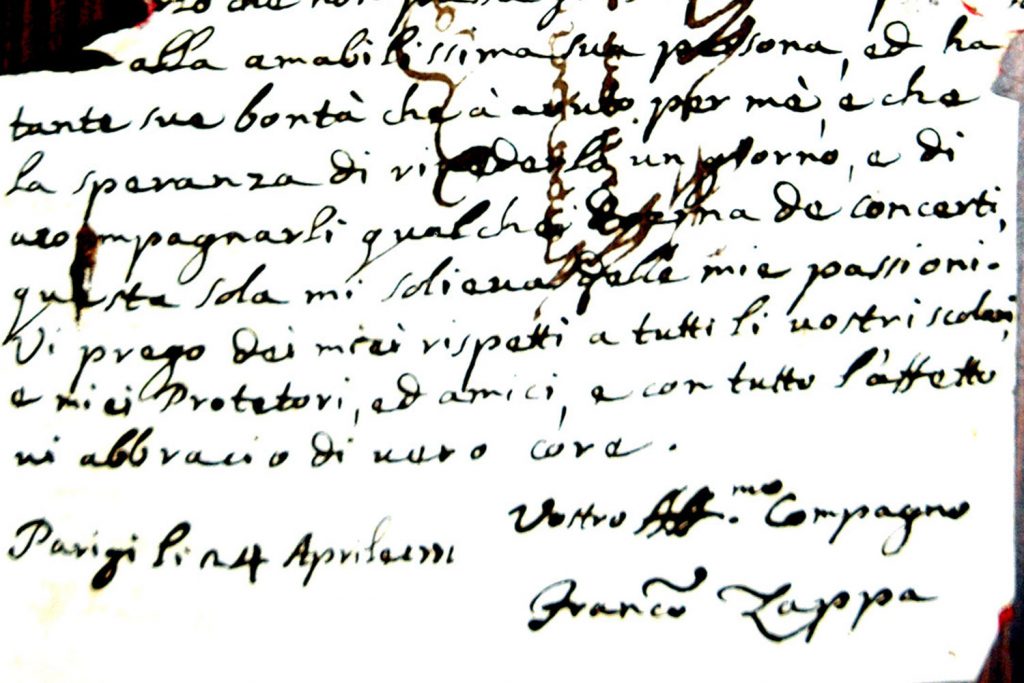 Reliable information about life and musical activity of Francesco Zappa covers a period from 1717 to 1803.

Francesco Zappa was born, probably in Milan, in 1717 and was a composer and cellist and the first traces of his career date back to 1763-1764: in those years, he met and gave music lessons in Milan to the Duke of York, who later wanted him to his service as «Master of Music», and he held that office until 1767, the year of the death of the Duke.

The only concrete reference to the period in Milan is on the cover of Opus I, where he is indicated as

Professor of Cello, and Composer of the Academy of Milan.

From 1764, his concert activity was very intense in France, Germany and the Netherlands: an essay by Oscar Tajetti reconstructs this lively period of work and travel through the correspondence of Francesco Pasquale Ricci, Choirmaster and organist of the Cathedral of Como, and affectionate friend of Zappa, with whom shared many experiences and musical concerts.

Particularly important is the letter of April 24, 1771, written by Zappa, who was in Paris, to Ricci. From the confidences to his friend, it is possible to get interesting information on his personality. The profile that emerges is that of a man enthusiastic about his work as a musician, constantly moving from one stage to another

And if you do not want to come to Paris, I’ll find somewhere that is not much out of the way to go to Vienna, and in this country I’ll wait for you, and we’ll make a nice trip, and earn money, and we’ll have a very good time, like true friends, like brothers.

In the background, we can also pick up some interesting considerations of Zappa on pre-revolutionary Paris, perceived as a chaotic and too expensive town.

I found myself in Paris in the worst time ever, because of so many changes in the parliament and courts. The whole nation is in a terrible turmoil and the pleasure to make academies has faded away. The money does not circulate and everything is more expensive than in London.

Zappa gained great achievements in Frankfurt on September 22, 1771, and in Danzig in 1781. A very vague testimony attests some concerts of him in Warsaw between 1784 and 1793.

A significant number of information on the life of Francesco Zappa comes from Dutch sources and mainly concerns its concerts at the court of William V, Prince of Orange (information kindly provided by Prof. Rudolf Rasch of the Utrecht University).
Three Dutch newspapers mention the musician many times:

Utrechtsche Courant
November 20, 1766, concert in Utrecht, Muziekzaal, ibid.
(Zappa is still referred to as «Master of Music» of His Royal Highness the Duke of York).

1766 / 1768
From a Plan to reduce the costs of the concerts of His Highness, edited by S. van Heiden van Reinestein, undated, but datable somewhere between 1766 and 1768, we learn that the pay of Zappa (indicated here as Sappa) and Ricci is 4 ducats each a concert; in a second salary plan it is instead reduced to 14 florins a concert.
Then, it is suggested to the king to engage the two musicians, for a total of 20 concerts, from 1 October to 1 May, for 40 ducats each (or 210 florins).

1768 / 1788
The information on this period are very fragmentary, because of serious gaps in the archives: it is certain that Zappa, ascellist and composer, was part of the Court Concert Orchestra in 1768, but it is not possible to determine precisely when this cooperation ceased, to be resumed in 1788, one more time as «Special Musician» of the Court and «Master of Music» in The Hague, as we learn from the title pages of his scores, published by Hummel.

1778
In a letter written in response to his son, Leopold Mozart provides a moderately critical opinion on musical Dutch entrepreneurship.
The disagreement also invests the publisher Hummel, who, in his view, deals only with minor celebrities, ‘easy’ composers, like Schwindl, Ricci and Zappa.
Leopold had previously met the three musicians in The Hague and his disapproval probably derived from the ease with which they found engagements for concerts and opportunities to be published.
The letter closes with an invitation to his son Wolfgang to go to Paris and to seek his way as a musician there.

1788
In the March 30 concert, Zappa plays the obbligato cello. The musician will take part in concerts at court for the next seven years until the end of the reign of William V (1795). He plays on 6, 13 and April 20 and receives three ducats for each concert; his name is at the head of the theater programs.

In June, Zappa appears in a document that describes the performance of court musicians during the visit of King of Prussia to Het Loo Palace.
The fee for 7 gigs is 125 florins. On 20 and July 27 he takes part in the court concert held at the Oranjezaal; for the August 13 concert he earns 7 florins and on 17 the pay is 15,15 florins. On September 28 Zappa takes part in another concert and in the last seven concerts of 1788 his earnings will always be 15,15 florins.
In December, a note indicates a payment of 63 florins to Zappa, for having composed music for piano and dedicated a symphony to Princess Louise. The information on the frontispiece of his Quartetto Concertante gives further confirmation that in 1788 he was «Master of Music» in The Hague.

1789
Zappa takes part in concerts on January 4 and April 26: for the latter he still receives 15,15 florins and his name appears at the top of the musicians list in the concert programs.
Towards the end of April, Zappa dedicates a symphony to His Highness for his birthday. On 13 and 20 September Zappa still plays obbligato cello in the court concerts; he will play at the Oranjezaal on November 1, at the Binnenhof on 15.

1790
Between January 24 and May 16, Zappa performs at the Oranjezaal with the court orchestra.
His name no longer heads the list of musicians, but his pay is always 15,15 florins (will be lowered to 14 in he latest concerts).
On February 28, he plays in the orchestra that accompanies the singer Madame Steffani.
On August 24, the marriage of Princess Louise with Charles Augustus George, Duke of Brunswick, is celebrated.
At the Oranjezaal, an orchestra of 24 musicians plays and Francesco Zappa is once again at the obbligato cello.

1791
In October and November, great festivities are held for the marriage of the Crown Prince, Frederick William of Prussia, and her cousin Wilhelmina: on November 2, Zappa plays cello in the first of the two orchestras convened to celebrate the solemn entry of the Prince and his bride; for this important event the pay is 31,10 florins.

1793
On May 4 and November 3, Zappa plays cello in the 24 elements orchestra that performs at the Binnenhof, proposing a «Great table music»; he receives 9 florins.

1794
On January 5, Zappa plays in the orchestra accompanying Mr. Cournion, who performs on obbligato violin. On February 2, Zappa, along with J. Malherbe and L. Spangenberg, performs in a public concert: the three musicians receive 100 florins by William V and the concert will be repeated four times in March.
On November 2, 1794 there is the last concert of the reign of William V at the Binnenhof and Francesco Zappa plays the obbligato cello. 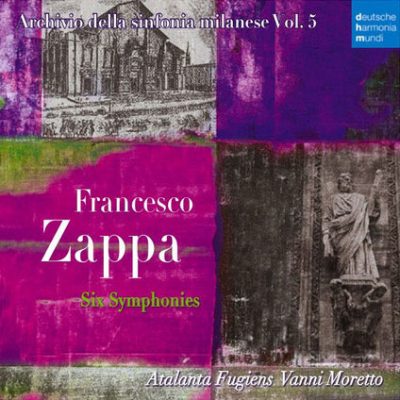 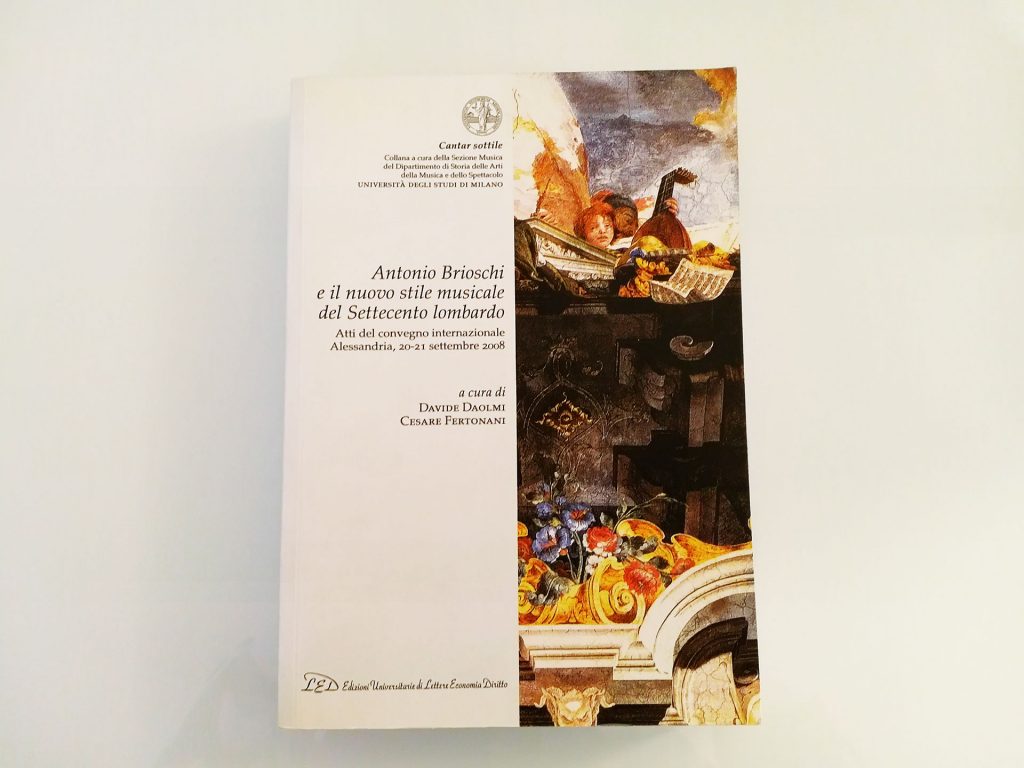